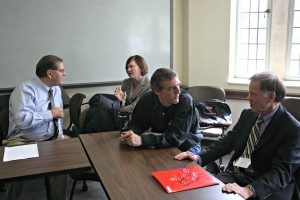 7:30-8:30 Breakfast at the Springhill Suites.  Transportation to campus.

1.  The Advantages and Significance of Religion for a Liberal Arts Education

Molly Flynn, Assumption College, “You’ve Got to Recapitulate the Positive”

Rick Kamber, The College of New Jersey, “How Appreciation of Religion Can Be Taught in a Secular Classroom.”

2.  The Classical Tradition: Conflicts and Conjunctions

Adam Kotsko, Shimer College, “’These Fragments I Have Shored Against My Ruins’:  The Wasteland, Modernism, and ‘The Western Tradition’.”

Matthew B. Koss, College of the Holy Cross, “When Cores Collide.”

Stephen Wirls, Rhodes College, “How the Secular Presupposes the Sacred and Why We Should Teach that Way.” 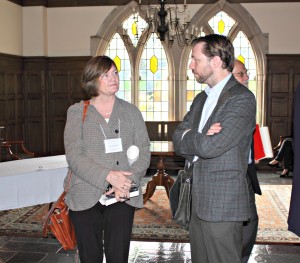 James Bryson, McGill University, “Love as Common Ground: Philosophy and Religion in Dialogue in the Symposium.”

Roger Barrus, Hampden-Sydney College, “Plato’s Apology of Socrates: Philosophy, Religion, and the Gods in the Origins of Liberal Education.”

Bainard Cowan, University of Dallas, “Dante as a Means of Access to a Christian-Secular Understanding of Reason.”

1. Shaping a Core from a Christian Perspective
Joseph Nagy, Sacred Heart University, "Turning the Soul: The Catholic Intellectual Tradition and the Liberal Arts." 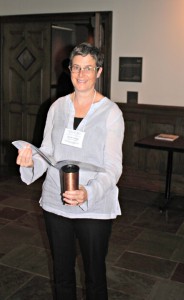 C.-J. Armstrong, Concordia University—Irvine, “Basil’s On Greek Literature and the Vocation of a Student.”

1.  A Suspension Bridge Over a Chasm.

John Isham, Carthage College, “Rhetoric as a Possible Bridge between the Sacred and the Secular.”

Mark A. Kalthoff, Hillsdale College, “Liberal Education, the Ordered Soul, and Cicero’s De officiis: A Core Text for Every Curriculum.”

2. Art, Prisms, and Politics: Can We Resurrect an Image?

3. Negotiating across the Religious and the Secular

Eastern Texts in a Core Curriculum

Peter Diamond, New York University, “The Place of the Analects in a Global Liberal Arts Curriculum.”

Roosevelt Montás, Columbia University, “Gandhi at the Intersection of Religion and Politics.”

Thomas Michael, Boston University, “Teaching the Daodejing in a Core Curriculum: The Origins of the World and Its Relation to Justice.”